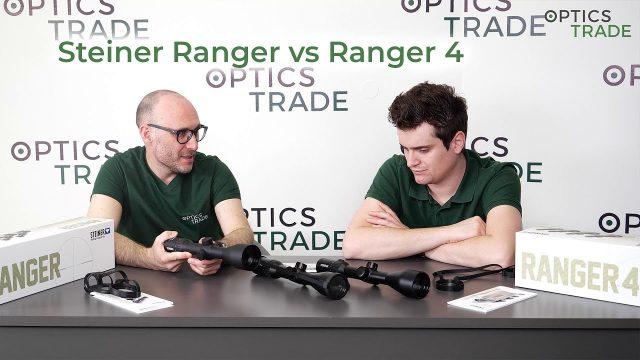 Hello and welcome to today’s debate, where we will discuss a new series of scopes on the market, the Steiner Ranger 4. We are big fans of the old series, which was on the market for about 5 years. Now, we will take a look at the new products and the differences between the two series.

It was only a matter of time when Steiner’s original Ranger series will get a successor, the Ranger 4 models. The differences are minimal, but there are plenty of them. Because of these differences, this scope will definitely remain one of the best sellers in the price range of 1000 €.

Let us begin with mechanical differences. The first one is the smoothness of the magnification ring – on the new model, it turns much more smoothly. The clicks on the turrets are crisper and you can feel the positions better.

The new scopes have fewer clicks per revolution (60) than the old ones (80). The clicks on the new models are re-settable, so you can quickly set them to zero, while this is not possible on the old models – you need tools to do so. Not many hunting scopes at the price range of around 1000 € can be ordered with a rail, but Steiner is not among them.

You will especially notice these minor differences if you are wearing gloves. That is because normally with gloves, it is more difficult to feel each click but now, the clicks are more prominent. As for the size, the new ones are longer for about 1 cm or 2.

They are still made in the US and not in Germany, as some people would think. What is also different, and what most people will debate about in the future, is the new reticle. Steiner kept the name 4Ai reticle but with the old one, the lines intersected in the middle, and with the new one, there is a floating fine dot in the centre. When the illumination turns on, the dot illuminates.

Staying on the topic of physical differences, some models now even come with a Zeiss rail. They used different coatings on the scopes, so now they are even more scratch-resistant – the difference is noticeable when putting the old and new model together side by side, due to the new model’s shine.

Let us move on to the optical properties. First of all, Steiner offers a wider field of view. The new models have increased the field of view by about 5 % – 10 %. The light transmission rate is also noticeably better on the new models, and the user can see the improvement even in daylight.

The illumination used to be daytime bright, even with the old twilight model. Now, it does not appear to be as bright during the day, as the scope is intended for low-light use only. We believe that because of all other optical features, such as the overall quality, a wider field of view, a better light transmission rate, a sharper image, etc., Steiner needed to cut the cost a bit, and they did it with illumination, as it is cheaper on the new model.

The bikini cover appears to be similar to the ones on the older models, but the flip-up covers would do them more justice. The warranty also remains the same, that is 10 years, and the riflescopes are serviceable in Europe. When the warranty period expires, you can still count on them to fix it.

If there is anything we failed to mention, feel free to drop a comment below or write us an e-mail. If not, and if you enjoyed the video, please like, share, and subscribe, and we will see you in the next one. Take care.

Which Red Dot Sights are Made in Europe? | Optics Trade Debates

Why is the Word Binoculars Plural?