An age-old debate in the tactical community, especially among the AR enthusiasts, is, and always will be, the height of sighting devices mounted on the rifle. Most shooters run their AR devices with several sighting options, combining at least two options for target acquisition – a scope or a red-dot, and some back-up iron sights. Now, this might be further augmented by other devices like a canted red-dot sight (with a scope) or a side-folding magnification device (with a primary red-dot), but those are no longer subject to the debate here. The question is, at what height to mount a scope or a red dot. The answer is simple – high enough for the shooter to be comfortable using it.

The more complicated question is, at what height the red-dot (let us skip the scope here, for simplicity sake, as they just do not work the same as red-dots in this matter) should be mounted in relation to your back-up iron sights or in other words, how these should be aligned with each other. We have two options, and we shall inspect and describe both, as well as the cons and pros of each. 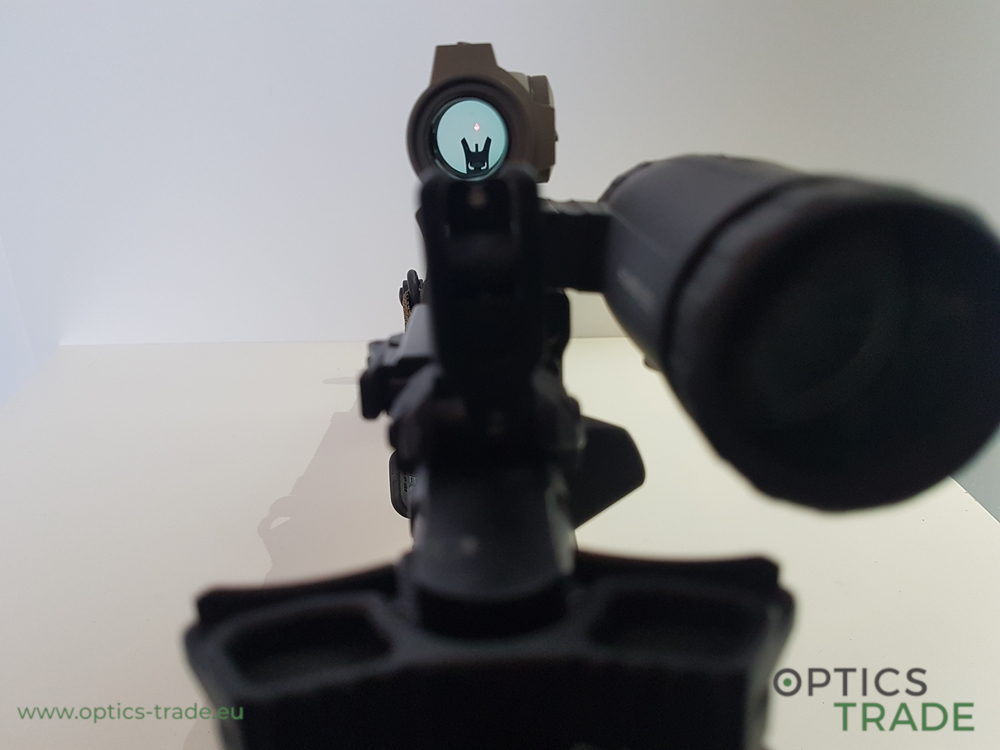 The two options are either the absolute co-witness, sometimes also called full co-witness, where the sights and the red-dot are aligned perfectly at the same height, so as if you look along the top of the rifle, you see both the sights and the red-dot aligned on the target. The second option is the so-called 1/3 co-witness, which means that the red-dot sits a bit higher than the iron sights, so that if you look along the top through the red-dot sight, you only see the red-dot, while the sights sit lower, at the lower edge of the device. It needs to be pointed out that should one drop his head a bit lower to aim through the iron sights, if all is right, the red dot should still align with the target. How the optic is aligned is controlled by different mounts and spacers, and most red-dot devices come with both options from the box. There is no right or wrong way here, both are good and both work. It is a matter of preference, but people will argue for either one or the other, and several reasons come up usually.

If we take a look at the absolute co-witness, there are two main arguments for, and two main arguments against. The good thing about this is that everything is perfectly aligned, it feels natural and it is just comfortable to use. It also means that, with everything being at the same height, no matter which sighting option one is using, the posture, head, and shoulder position as well as the feeling, are the same. That is because we put our heads in the same spot and fix the buttstock as we are used to, no matter if we are using the dot or the sights. What speaks against it is the same fact that the sights and the dot are perfectly aligned, which can cause problems to certain shooters. It can obscure the vision of the target, disrupt the visibility of the red-dot, and simply covers up too much of the field of view through the red-dot lens. Some shooters will also argue that having the dot and the sights in the same place will naturally make you want to put align the front post with the dot, which is not necessary but can also delay your shot. This is a very individual thing though and depends on the user.

The 1/3 co-witness is, obviously, just the other way around. It works where the absolute has some problems and lacks where the absolute offers more. It offers a clearer view through the red-dot tube or lens, with less obstruction and a clear distinction from the dot. It makes it more natural to simply use the dot and forget about the sights unless you need them. The problem with it is that you need to move your head up and down if you want to switch from the dot to the sights, which is far from perfect, and also, you can not run your rifle, as it feels natural this way if you are not very used to doing it. 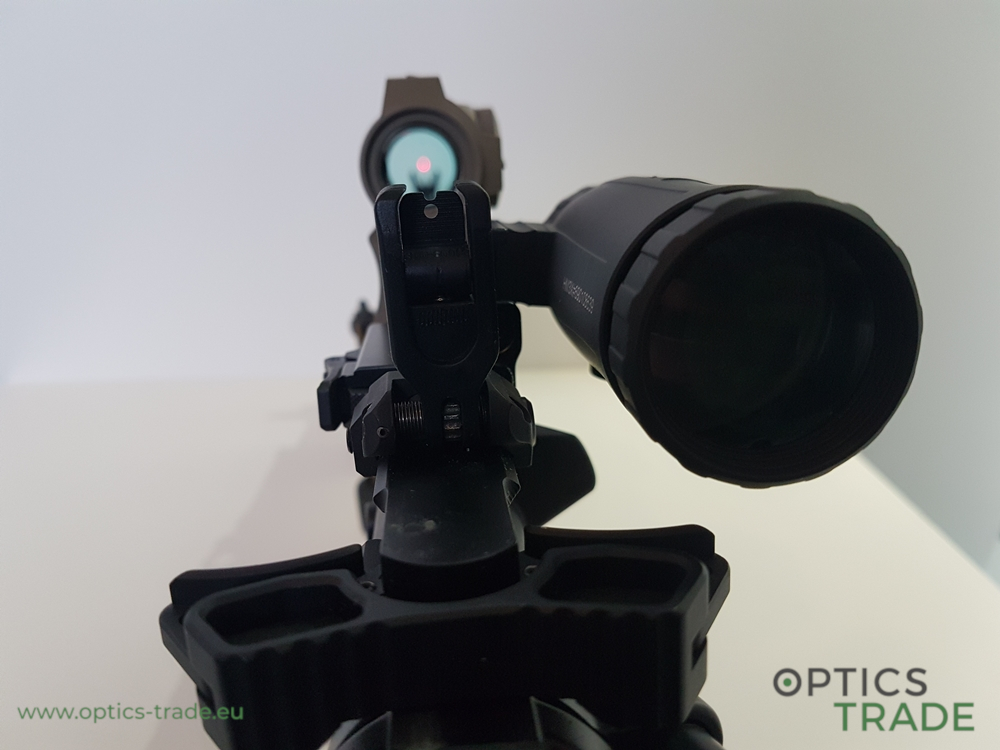 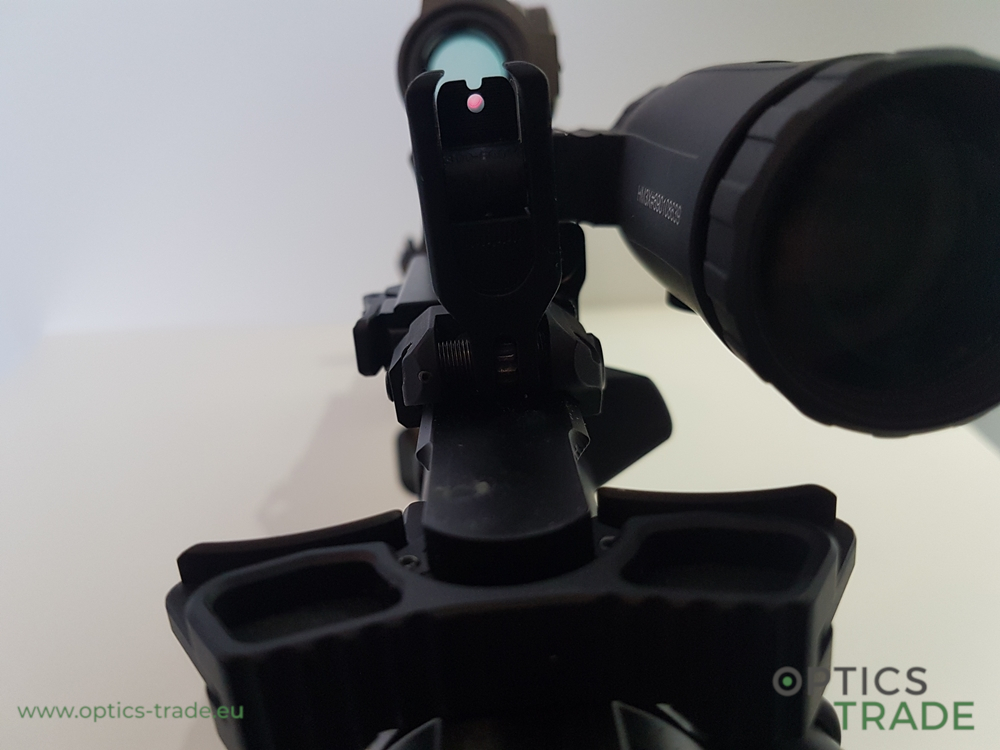 Some will also argue that if running the 1/3 co-witness, the sights and the red-dot need to be zeroed separately and differently, while one can simply zero the red-dot and then just align both posts with the dot in absolute co-witness. While there is some merit to this, it is probably best to have all sighting devices zeroed in separately and perfectly in any case.

Wrapping it up, it is true that both of these styles work. And both have slight advantages and disadvantages, both none of which is actually significant enough to give the shooter an actual edge, but more like just giving him what he feels he needs in his way of running the rifle. It all comes down to the preferences and the needs of the shooter, and what is most comfortable for them. There is one more argument that we would like to point out in favor of the absolute co-witness in the end though. With the diversity and frequency of use of all the folding sight options out there today – most of the arguments against absolute co-witness are made quite invalid when simply folding your sights. It is thought though, that many shooters prefer to have at least the front post fixed, for reliability sake, but that is a topic for a different blog post.

Where Are Vector Optics Riflescopes Made?

Homemade burger recipes that use game and venison – easy to make and delicious...