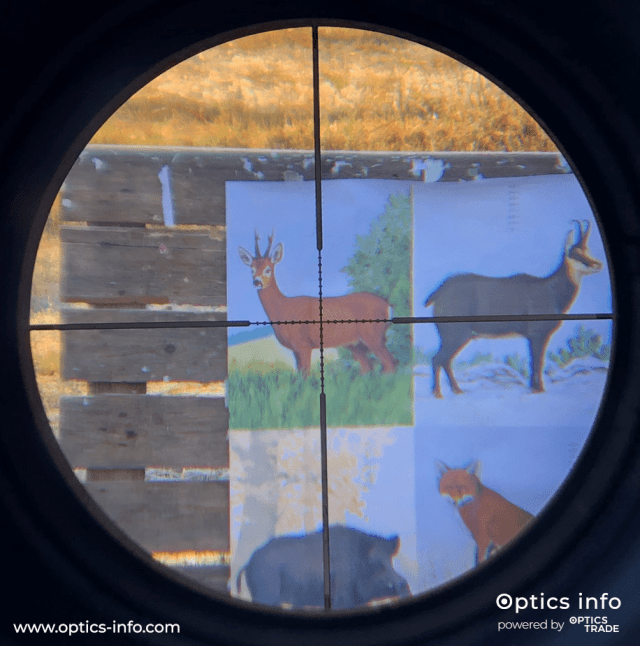 Even as a hunting trainee, I was very interested in competing. I started training and competing with a Brno 2 small-caliber rifle, manufactured by Czech Zbrojovka, and a Bushnell Trophy 3−9×42 riflescope. By watching other shooters, I realized that I could achieve better results with a better rifle and a riflescope of higher quality. After two years, I decided it was time for a replacement.

After consulting with my shooting friends and experienced shooters, I bought a used Anschütz Match 54 .22 LR small-caliber rifle. Then, I focused on buying a riflescope. The starting criteria for the purchase were: a parallax-free riflescope, a 12x variable magnification and a price range up to 250 €. After consulting with Optics-trade, I bought a Hawke Hunting Rifle Scopes with a Mil-Dot reticle which met all the criteria and was in my price range.

I decided to buy a new one. Once again I visited Optics-trade, where I had many different riflescopes to choose from. The purchase criteria were similar to the previous one with one essential difference – I wanted my riflescope to have a 16x magnification or more this time. Therefore, I chose to purchase a Delta Optical Titanium 4–16×42 AO riflescope with a Duplex reticle. The advantages of this riflescope in comparison to the Hawke riflescope were a higher variable magnification, a thinner reticle and better image quality. It is somewhat more expensive but still has a great price-quality ratio.

This riflescope served me well, but with time I wanted an even better riflescope. I bought it last year (2019) at the beginning of the season. Naturally, this kind of replacements and purchases of new riflescopes happen frequently, but I must say I am currently more than satisfied with my Sightron S TAC 4-20×50 with an MOA 2 reticle. Compared to the other two riflescopes, it has an image of higher quality. The objective lens diameter is 50 mm, which contributes a lot to a bright and quality image. The MOA 2 reticle is very thin and appropriate for target shooting and the magnification range is quite wide, which is more than welcome. Price-wise it is 2x more expensive than the Hawke riflescope I owned in the beginning.

The first two riflescopes I owned were less resistant to minor shocks and vibrations. The last one, Sightron S TAC 4-20×50 SF, has never moved during hunting & shooting, whereas with the other two I had to make small adjustments of the reticle as well as the parallax during the season.

A price was also a big factor in all replacements. I was always searching for a reasonably priced riflescope, but I also wanted good quality. In the end, after all the replacements, I have come to the conclusion that it is better to go into a slightly higher price range in the beginning, thus overcoming all problems and doubts about the right purchase. Ultimately, because of all my replacements and new purchases, I spent more money than I would if I had initially bought the riflescope I own now. Of course, the purchasing path depends on each individual, as requirements vary from person to person. Even the first riflescope I had is sufficient for normal use or competing in all hunting disciplines that are listed above. However, I really recommend consulting with experienced shooters and looking at a target through different riflescopes for making it easier to decide what to buy.