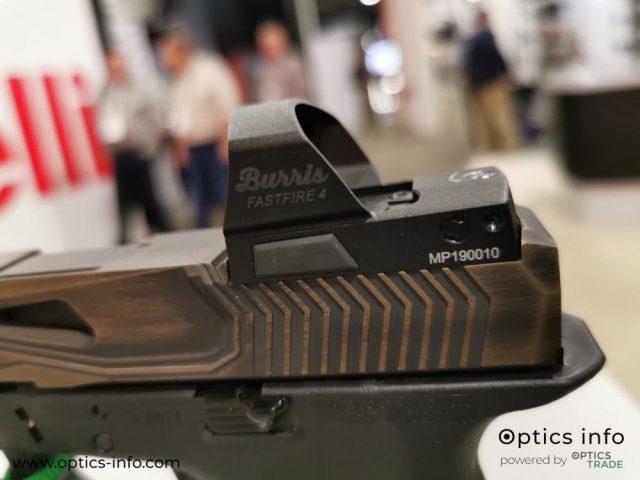 Fastfire red dot sights by Burris are among the most popular compact reflex red dot sights on the market. For this reason, we were eager to stop at Burris’ booth at Shot Show 2020. Fastfire III was already a nice step up from Fastfire II – which upgrades does number 4 bring along?

The first thing that we noticed is the shape. Fastfire III had rounded edges which made it look conservative. The new, updated model is composed of straight, daring lines, especially at the front part where the lens is, contributing to a bold, modern design.

Once we looked at its features, we were taken aback by one in particular – the switchable reticle feature. You can toggle between four – a 3 MOA dot, an 11 MOA dot, a 3 MOA circle dot, and an 11 MOA circle dot. The switchable reticle option makes this compact, rugged red dot sight a multi-functional device. The 11 MOA dot is great for short distances – mainly pistol use. The standard 3 MOA dot works great on a rifle, where you shoot beyond pistol shooting distances and some extra accuracy is needed. 4 reticles mean that you basically have 4 red dot sights packed in 1 – you can use the sight for 3-gun competitions, patrol, plinking, you name it!

Because of their design, open reflex sights are exposed to rain and snow – when something falls in between the diode and the lens, you no longer see the dot. Burris came up with a solution. When you purchase Fastfire IV, you get a removable weather shield. It won’t come off during shooting thanks to the clever slide-mounting solution.

The window is slightly bigger than on Fastfire 3, allowing faster target acquisition. The battery compartment is at the same location (behind the lens, meaning that you don’t have to remove the sight from the firearm to change the battery). The battery is still a CR1632 but Burris claims that the operating time on a single battery has been extended compared to Fastfire III.

Other than that, much remains the same. The elevation and windage adjustment screws ‘click’ when rotated. The click value is 1 MOA, meaning that one click moves the point of impact for approx. 1.5 cm at 50 m. Thanks to its impact-resistant housing, Fastfire 4 is shockproof as well as waterproof.

This modern, compact red dot sight is sure to impress with its big window, switchable reticle, and supplied weather guard – these characteristics make it a universal device. We haven’t been informed about the price in the EU yet – we anticipate that it is going to be somewhere between 400 and 450 €.