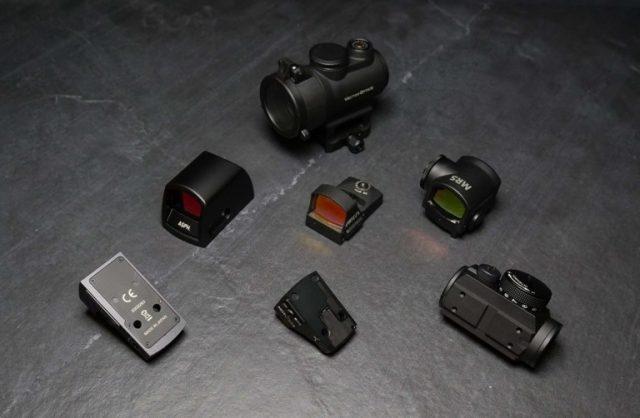 Red dot sights have been steadily gaining in popularity – for this reason, they can be found in the offer of most manufacturers of optics around the world. Even companies such as Kahles and Leica, who haven’t manufactured red dot sights before, have recently launched their own versions.

In this article, the most common footprints/mounting standards used on red dot sights are listed. Each standard is described and an image of it is added. At the end of each section, red dot sights that use the footprint discussed are listed.

This is one of the most widely used footprints in the field of red dot sights. It has two holes for screws and four sockets in which the pins on the mount/adapter fit, one in each corner. There is a wide range of mounts for this footprint on the market, which is one of the main reasons why it is used by so many manufacturers. Docter/Noblex standard is simple and reliable.

Aimpoint is the first company to have used this standard on their Micro small tube sights. Today, other manufacturers of this type of sights use it as well. The surface of the footprint is slightly lifted in the middle – on each side of the lifted section, there are two holes for screws. The lifted section is cut in the middle – this is where the recoil stop fits.

GPO Spectra uses a footprint that is identical to the one used by Aimpoint Micro. Even though it appears to be the same at first sight, there is a protruding part underneath the illumination knob. Because of it, the adapters designed for an Aimpoint Micro footprint do not fit into place at that side (check the picture below). GPO Spectra uses a unique adapter with narrow side sections.

Hawke Endurance 1×25 and 1×30 red dot sights also use a footprint slightly different from the Aimpoint Micro one. The lifted section in the middle is wider, thus adapters designed for a Docter/Noblex footprint do not fit in place.

This is a standard found on C-more’s popular red dot sights, RTS and STS. Some other manufacturers also use it because of its simplicity and reliability. The footprint has two holes for screws and two sockets in which the pins on the mount/adapter fit.

Shield sights are incredibly compact, which is why Shield had to come up with a footprint of their own. It is designed similarly to the Noblex/Docter footprint (there are two holes for the screws and four sockets in which the notches on the mount/adapter fit, one in each corner). The sockets, however, are a little bit wider and closer one to another.

Even though Shield RMS and RMSc differ in dimensions (the ‘c’ version is smaller), the distances between the holes are the same, which is why an adapter designed for Shield footprint fits on both.

A modification of the Shield standard

A modification of the ‘Trijicon MRO’ footprint

Aimpoint designed a new footprint for their Acro red dot sights. There are grooves on the side of it with a movable part used to fix the red dot sight in place. The movable part is connected to a recoil stopper. The system is similar (but not the same) as the one designed for a Picatinny rail.

Steiner MPS’s footprint is identical to the one on Aimpoint Acro. The grooves in which the adapter fit are not in the exact same place but the recoil notch is. This is why adapters designed for Aimpoint Acro’s footprint can be mounted on MPS as well.

Red dot sights that have a unique footprint

Trijicon RMRcc has a footprint without recoil-stopping sockets. There are two holes for screws between the middle and rear section. The size of the footprint is similar to Shield RMS/SMS, Leupold Delta Point Pro, Holosun 407/507K, etc.

This red dot sight has a unique footprint that works similarly to a footprint designed for the Picatinny rail. The adapters suitable for it are slid into place and then fixed with the movable side section. A recoil stop helps keep the adapter in place.

The footprint of the Infinity models is flat, with three notches for recoil stoppers. The adapter is fixed in place with four screws.

Sig Sauer’s Romeo 1 has a footprint suitable for mounting on certain Sig Sauer pistols – you will need a special adapter if you wish to mount it elsewhere.

All Steiner MRS red dot sights share the same footprint – there are only two narrow notches in the front, while the holes for the screws are located at the rear of the sight, on both sides, left and right.

The ‘Universal’ model, however, is supplied with an adapter which converts the footprint into the one designed for Docter/Noblex adapters.

Even though this footprint looks identical to the one on DI Optical RV2, there are minimal differences between the two. The lifted sections with screw holes are narrower on RV2. Because of some other minimal deviations, the supplied adapters are not interchangeable between these two sights.

This article is regularly updated with new information and user contributions. We aim to create a collection of useful data that will be of great help to users, potential buyers of red dot sights, and those who are looking for a specific mount/adapter for their red dot sight.

If you have a compact reflex or small tube sight that isn’t listed in this article, please be so kind as to send a picture of the sight and its footprint to andraz.gradisnik@optics-trade.com – help us expand our database. We greatly appreciate everyone’s help!

Here are listed all red dot sights we measured:Search:

An adapter plate is needed if you wish to mount a red dot sight on your handgun. As there are red dot sights with different footprints on the market, it is important to pick the suitable one. Some handguns are optic-ready and come with a footprint-specific plate. In the following link, you will find a vast selection of red dot sight plates that either fit directly on a specific handgun or convert the existing footprint-specific surface to make it compatible with another footprint:

Where are Nikon Binoculars Made?