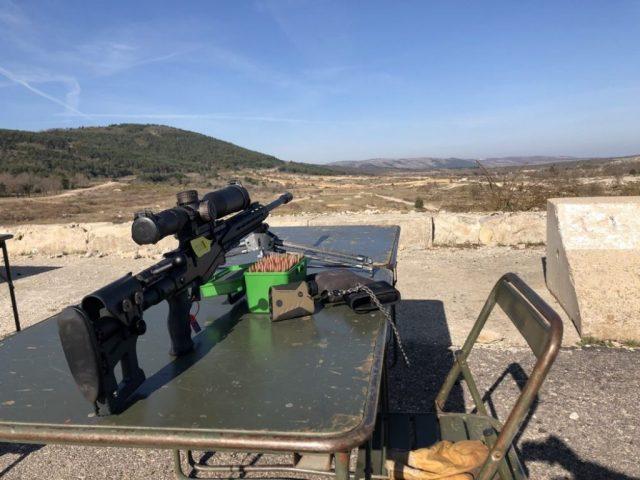 The ˝King of two Miles˝ is the biggest extreme long-range competition worldwide. The first competition of this type was in the year 2015, and since then, once a year the competition takes place in New Mexico – USA. For the first time, the competition was organized in Europe, on a military shooting ground just half an hour north of the city Draguignan in southern France.

The competition took place from 19th to 22nd of April, simultaneously with the Master of 2 kilometers competition. The Optics-Trade team was also competing, but only in the Master of 2 Kilometers, because nobody in our firm has a rifle capable of shooting at such great distances. After 12 hours of driving, we finally came to the entrance of the military camp called Camp de Canjuers. Right at the entrance was the first part of the registration, where we got the neck strap with the ˝Participant˝ card and the card for our car, which allowed us to enter the camp during the competition.

The ˝Participant˝ card we got on the entrance, at the first registration point

When enough participants came to the entrance, a pilot car showed us the way to the second registration point a few kilometers away from the entrance. There we met some friends from the EXLRS.com and the Kahles team. Soon the second registration started where every weapon was weighed; we had to tell them the manufacturer of the weapon and of the optic. Our equipment was more of a ˝Tactical style˝, with a Ritter&Stark SX-1 MTR rifle chambered in .338 Lapua Magnum, equipped with a Vortex Razor HD Gen. 2 4.5-27×56 rifle scope and a Tier One FTR Carbon bipod. The spotting scope Teodor used was a Nightforce TS-82, and for the distance measurement the Sig Sauer KILO 2400 ABS. When this was done, they clipped a seal on the weapon with a number. When all competitors were registered, the organizers had a short speech for the opening of the competition.

The second day of the competition, or the first day of the shooting, we went to the shooting location right at 8:00 in the morning because we were shooting second in the sequence. At the shooting line, the organizers had a big tent where they had a big screen, on which they had the picture from the cameras by the targets. Right next to the tent were 2 shooting positions. A few meters away from the shooting positions were 3 tables for shooters to prepare their gear. Because we were shooting second in the sequence, we were called to the table very soon. We got the distances to the target and received instructions. The targets were on these distances:

The distances to our targets, a few minutes before the shooting

The weather was extremely challenging. At the shooting position, I measured the wind speed, which was ranging from 10-25 km/h, but sometimes the gusts were strong even up to 35 km/h. Our shooting started at 9:45, and we had 9 minutes time to engage 5 targets. The first target was a ˝cold bore˝ target at 732 meters. It was also the smallest target of the competition, measuring just 0.5 MIL through the scope, which equals 37×37 centimeters.

Getting all the equipment ready for the shooting. The rifle is a Ritter&Stark SX-1 MTR, with a Vortex Razor HD Gen. 2 4.5-27×56 rifle scope and Tier One FTR Carbon bipod. SSD bullets and SIG Sauer Kilo 2400 ABS rangefinder.

The first shot I fired was just a few centimeters over the target. Then I went to the second target, which was a square at 660 meters. The first shot at this target was again a little bit too high, but because my spotter Teodor saw the impact on the ground behind the target, he told me how much to correct, and so all next 4 shots were hits. The third target was at 767 meters, where I managed to hit the first and second shot, but unfortunately, I missed the third shot.

The next target was at 1157 meters, on which I hit with the first shot but missed the following two because of the extreme wind at the distance. Because I hit once, we were able to continue to the last target at the distance of 1457 meters. Unfortunately, we didn’t have any hits at this distance. The first shot on that target was around 10-15 centimeters below the target. The second shot was even lower, around 0.5 meters – we still don’t understand why this happened. Maybe because of the strong wind that was constantly changing directions, or maybe it was just my fault. Never mind – I fired my last shot at this target, which missed it just a few centimeters on the right side.

This was it – we finished the shooting with a minute left from 9 minutes. We were quite happy with the result, and then we waited for our friends from the Kahles team to shoot. They managed to make a great result. When they were done, we left the range.

The final result of our shooting

The next day we drove to the other shooting position, where the finale of the King of Two Miles was. The 10 best shooters from 35 participants came to the finale. They were shooting distances from 1427 to 1829 meters the first day, and in the finale from 2430 to 3270 meters. I have to say that their equipment is on an extremely high level, and here we came to the same answer – .338 Lapua Magnum is too small a caliber for these distances. From all the finalists only one shooter had the .338 LM, and all others had much bigger calibers like the .375 CheyTac, .375 SnipeTac, .408 CheyTac, .416 Barrett, and the .460 Steyr. The shooting location was very crowded, and most of the people had spotting scopes for spotting the shots of the shooters. The conditions were challenging since the wind was extremely strong and was constantly changing directions. From all the finalists only one shooter was able to hit the last target at 3270 meters, which is, in this wind, a remarkable success.

Like mentioned, the equipment of the competitors was remarkable. Especially on the King of Two miles, where you need a lot of elevation, we noticed that many shooters had the new March Genesis 6-60×56 rifle scope, which has 400 MOA of elevation. Many competitors had the Charlie Tarac from TACOMHQ, which is an optical device that adds elevation. The user has to install the device in front of the normal rifle scope, and you are ready to go.

The King of 2 Miles shooting range from a different perspective, with a BCM Europearms rifle

When the finale of the ‘King of Two Miles’ competition was finished, we moved to the other shooting location where the Master of two Kilometers competition was still going on. We had to wait until the qualification round was finished and the organizers calculated the points of each shooter. At around 17:00 we got the results. We managed to get to the 14th place, because of which we were quite happy, but also a little bit disappointed because if we were only 4 places better, we could get into the finale. After that, when we said goodbye to all our friends, we got in our car and drove home.

During our 12 hours of traveling time, we had plenty of time to go through our mistakes. We concluded that the 14th place was a great success for us, especially because we had no training before the competition. We’re looking forward to competing in this great competition next year.

Other optics and mounts

Why are Spotting Scopes Angled?

Where are Nikon Binoculars Made?