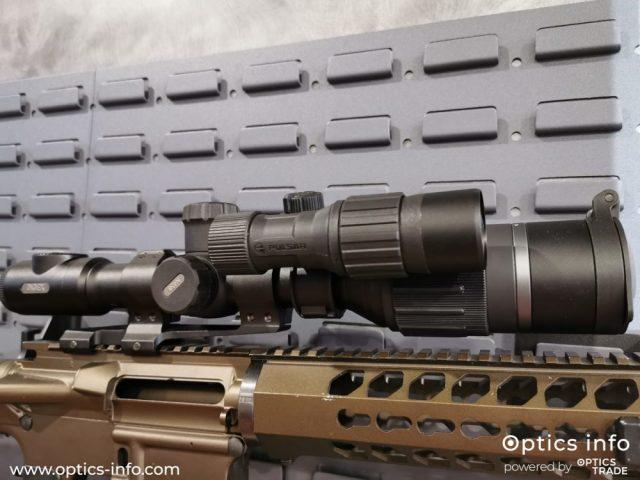 This Belarusian company is known for working their fingers to the bone when it comes to development. They update their offer each year, making it difficult for the competition to keep up. Furthermore, they often launch free software updates for their existing devices.

They were the first ones to install a thermal imaging device into the housing of a standard-looking riflescope. Making NV/thermal devices look like day sights appears to be a contemporary trend – what are the advantages of using such a form factor? Since it features a 30-mm tube, finding the perfect mounting solution is simple. Furthermore, you can mount it low on a rifle and achieve optimal eye relief thanks to the long mounting surface of the tube. Finally, it looks nice – the form factor of a riflescope is appealing to the eye.

Digex features a highly-sensitive HD CMOS sensor which helps provide a high definition image, full of details. Even though the IR-illuminator is provided, you will only have to turn it on in complete darkness thanks to the advanced electronic components and signal-processing algorithms. The provided illuminator either emits light with a wavelength of 850 or 940 nm (based on the model chosen). Hunters will be especially fond of the 940 version since the wavelength that it emits is completely invisible to the game. There are three intensity levels of the illuminator to choose from. The display is of the AMOLED type, featuring a 1024×768 pixel resolution. The magnification range at disposal is 4–16x. Pulsar states that the user can detect a deer-sized animal at distances 500 meters away, but to clearly identify the animal, it has to be closer, up to 200 m away (to clearly distinguish an animal at such a distance, environmental conditions have to be optimal). There are 5 shooting profiles to choose from; each holds up to 10 zeroing distances. As many other Pulsar devices, this one too is equipped with a stadiametric rangefinder (it can provide the user with a distance to an animal of a known size).

The device is extremely durable and shockproof, capable of withstanding the strongest recoil, even that of .12 gauge, 9.3×64 and .375 H & H calibers. Even though it features an all-metal rugged housing, it isn’t too heavy, weighing 950 grams. Pulsar coated the exterior in a special antiwear coating that helps preserve the surface of Digex. In some of their newest devices, Axion included, Pulsar included a magnet to help the user move the lens cover out of place. The same solution is featured on Digex – You can twist the objective eyecup towards the objective bell where the magnet is going to hold it in place. The removal of the cover is also possible. Digex features the IPX7 level of protection, meaning that it is fully waterproof – it can even withstand a 1 m deep submersion for 30 minutes. It continues to operate in extreme temperatures such as  –25 °C and 50 °C.

You can capture images and record videos. The files are saved in .jpeg and .mp4 format, respectively. Thanks to the 16 Gb of internal storage, you will be able to store plenty of data before a transfer of files to the computer’s hard drive is needed.

Digex, as expected, is Stream Vision compatible. Download the Stream Vision app (iOS and Android) to your smartphone and benefit from various useful features. You can manipulate with Digex’s functions in the app, transfer the image from the device’s display to your phone in real-time, stream the image on the internet, etc. The device has an integrated video and sound recorder. The Picture-in-Picture mode allows the user to zoom-in a certain part of the image while maintaining awareness of the entire field of view.

The device powers up almost instantly, which is a huge advantage of all contemporary Pulsar devices. It boasts an automatic shut-down function – if it is at an angle of more than 70 degrees vertically or 30 degrees horizontally for longer than the set interval, it turns off automatically.

There are 10 reticle shapes at disposal, available in 9 colour modes. As the reticle is electronic, it stays in the same plane with the target. Some of the reticles are ballistic – they work as a reticle in a standard FFP-riflescope, remaining proportional regardless of the magnification change. It is powered by two batteries, the same as Thermion. The first one is built-in, the second one is rechargeable. The rechargeable one is of the APS type – the APS2 battery is provided in the box, but Digex will also work with an APS3 with a bigger capacity which you can buy extra. When the rechargeable battery is discharged, Digex automatically switches to the built-in one.

There are 2 models to choose from, the N450 and the N455 model. The main difference is in the provided illuminator. N450 is equipped with an illuminator that emits light with a wavelength of 850 nm, whereas the one on N455 emits light with a wavelength of 940 nm. The latter is invisible to animals, while the former grants the device a little bit better detection range because it is more powerful (550 m compared to 500 m of N455). Other than that, there are no differences between the models. The majority of hunters will, undoubtedly, go for the N455.

Digex is a modern digital night vision device, packed into the housing of a standard riflescope. The form factor brings along several advantages, but Digex wouldn’t be as good as it is without Pulsar’s high-tech software and the sensitive HD CMOS sensor. It is expected to retail for around 1000 €, a real bargain for what it has to offer. It is already available – the serial production started in January.

Where Are Vector Optics Riflescopes Made?