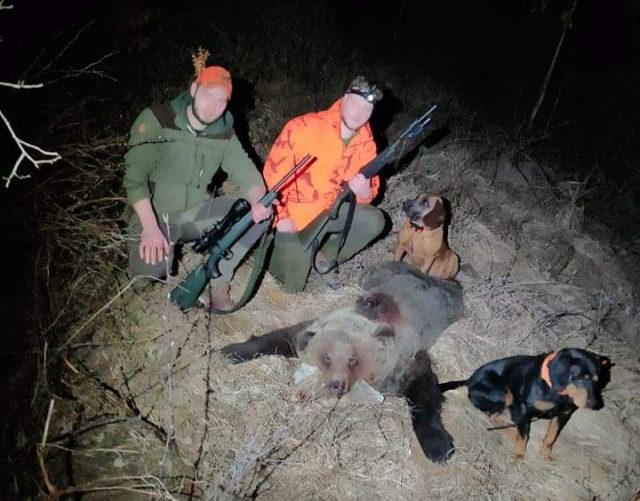 On the second March we got permission to hunt a brown bear in the beautiful forest of Slovenia. My friend and I went on a hunting stand with two rifles, caliber 8×57 JS and 30-06 Spr. with mounted HAWKE and Doctor optics. We arrived on the hunting stand at 18.00 pm, when the sun was already getting down. We settled in and then we waited if the brown bear is going to show up. At first, a roe deer buck came under the feeder, he spend there almost a whole hour before he left and just a few minutes after he left the long-awaited brown bear has shown up.

The shooter got ready to take the shot, now he just had to wait for the brown bear to turn correctly. At 19.15 pm he took the shoot and hit the brown bear with 8×57 JS, Geco PLUS bullet. The bear ran a few meters and he has fallen down, we waited for 20 minutes so he calmed down. Then we packed up our things and went carefully to the point where the bear was standing but we haven’t found any evidence that we hit the bear even though he has shown signs of the bullet impact at the shoot.

Even though we haven’t found any evidence of the impact we have decided to get the professional blood trail dogs to start the blood trail search 4 hours after we took the shoot. For the blood trail gear, I have used Garmin GPS Alpha 50, for both of my dogs, Amor and Knox. The rifle was Hannel Jaeger 10 in caliber 8×57 and we had three Led Lenser lights with additional battery. When we arrived to the estimated point of impact I have released both of my dogs because of the safety of the blood trail. The dogs have instantly got the wounded brown bear track in their noses and started to chase him down. We have been following the dogs for about three kilometers when the dogs started to bark on the brown bear, the bear tried to escape and was slowly moving for additional two kilometers. It took us about one hour and thirty minutes to get to the brown bear so that we were able to take the shot. Just before the shot I turned the extra lights on so I could have a clear shot at the Bear. I shot him in the neck and he has fallen down instantly. So here we have another successful story of blood trail tracking.

Where are Swarovski Riflescopes Made?

What Red Dot Sight Does the Military Use? | Optics Trade Debates