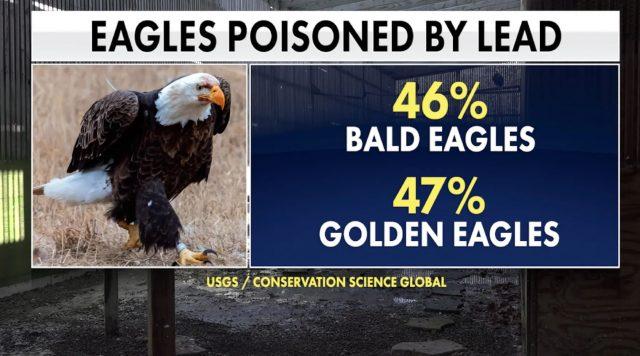 CLEVELAND, Ohio – The bald eagle population is being poisoned by lead at an alarming rate.

Across the U.S., bald and golden eagles are repeatedly exposed to lead, according to new research. The study sampled more than 1,200 birds in 38 states and found that 46% of bald eagles and 47% of golden eagles have chronic lead poisoning.

Scientists believe eagles consume trace amounts of lead when they scavenge the animal remains left behind by hunters that used lead bullets.

The effects of lead poisoning can be deadly for birds and even slow the rate of population growth.

“What we saw in association with this lead exposure is population growth rates in bald eagles are being suppressed by 4% and 1% in golden eagles,” said Vince Slabe, a wildlife biologist and co-author of the new study. “In a stable population, any suppression of this growth is of concern.”

The study’s findings could signify a potential setback for the bald eagle, which was endangered from 1978 to 2007. Bald eagles were near extinction by the 1960s because of a now-banned pesticide called dichlorodiphenyltrichloroethane (DDT). Since then, the bald eagle population has soared to more than 300,000 birds in the wild today.

Todd Katzner, a conservation ecologist with the U.S. Geological Survey and co-author of the new study, told Fox News the bald eagle population is still thriving despite the threat of lead poisoning. Katzner said golden eagles may not fare as well.

The bald eagle population has soared to more than 300,000 birds in the wild today. (Stephen Goin)

The findings of the study have renewed calls among conservationists, pleading with hunters to use non-lead ammunition. The federal government banned lead ammunition in hunting waterfowl in 1991. A number of states enforce their own regulations on top of that. California banned the use of lead bullets by hunters 2019.

2021 WAS SAFEST HUNTING SEASON EVER FOR THIS US STATE

Chris Parish, president of the Peregrine Fund, believes most hunters don’t know about the toxic effects of lead. He co-founded the North American Non-Lead Partnership to educate hunters and encourage them to voluntarily switch to alternative ammunitions that don’t use lead – like copper bullets.

“Hunters are the only way to solve this problem, and the best way to appeal to a hunter is to work with them not work against them,” Parish said.

Where Are Vortex Riflescopes Made?