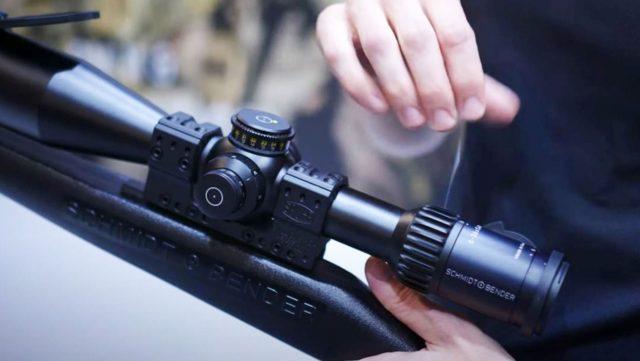 Just when we thought all was quiet on the western front, 2022 turned into a bonafide meteor shower of top-of-the-line tactical scopes.

Schmidt & Bender 6-36×56 PM II impresses with its compact build. It’s surprisingly shorter than S&B 5-25×56 and far less bulky – once you look past the 34mm tube (1.34oz), that is. Despite the sleek aesthetics, this scope is built to military specs and is available in standard black or RAL 800.

It’s sealed with dry nitrogen and waterproof to 3 meters. If money is no object, Schmidt & Bender can punch this number up to 10,  20, or even 25 meters on request. Temperature shock won’t be an issue with this S&B PM II either. From -46°C to +71°C, it will perform like a well-oiled machine.

Here’s another good news. No more busted knuckles for left-handed users with .300 Win Mag. The German manufacturer has got with the program and removed the huge illumination turret near the eyepiece, which infringed upon the precious mounting space. Like most competitors, Schmidt & Bender 6-36×56 PM II now has the illumination dial built into the side parallax.

Not only does it give you more mounting solutions to select from, but it also saves on overall scope weight. This is a great perk. With only 940-955 grams to its name (depending on the configuration), this Schmidt & Bender is considerably lighter than ZCO840 (1150g) and Vortex Razor HD (1300g).

Another upgrade is the redesigned diopter (-3 to +2) that now allows easy attachment of polarization filter. The aluminum fast-focus ocular has deep grooves for a better grip with gloved hands.

The side parallax turret on Schmidt & Bender 6-36×56 PM II can be adjusted from 20 meters to infinity, so you’ll be able to get some indoor practice before moving on to bigger and greater things.

Schmidt & Bender scopes are known to be tailor-made to their customers’ tastes, with plenty of customizable features. Nowhere is this as apparent as in 6-36×56 PM II’s wide selection of turrets.

The combination of exposed elevation turret with capped windage one is a new trend in tactical scopes. Not everyone likes it but the influence of competition scopes is obvious.

Even more options are available per request.

New low-profile DT27 and DT35 MTC LT elevation turrets come with a yellow pin turn indicator and have very thin knurling. They’re best suited for combined use of the scope with a red dot. Mid to extreme long-range shooters will certainly appreciate the abundance of turret travel (27 or 35 MRAD). But be aware that the clicks are very fine and close together. If you find yourself in need of super-precise corrections in a blink of an eye, these turrets are not the right choice for you.

MT II MTC LT elevation turret can be fully rotated 5 times and uses centimeters, not MRADs. Click value is 0.5cm/100m. For easier orientation, only every 5cm step is actually engraved. In the same manner, every second revolution is marked in yellow, so you’ll always know where you’re at.

The single-turn capped windage turret with zero-click (ST ZC CT) is best for tactical use. Once the scope is zeroed in, there is no need for further windage adjustments. The cap is there to eliminate unintentional changes mid-use.

Competition shooters will prefer the ST II ZC LT windage turret as it is made with fast and frequent wind corrections in mind. Large font numbers and high-visibility marks make quick and efficient dialing easier. This turret is also single-turn but lockable, with a Gen II locking function.

The double-turn DT II+ ZC LT windage turret has a yellow pin that serves as a visual and tactile turn indicator. The further left you dial, the more it pops out.  You’ll notice that manufacturer always combines this windage turret with the MT II elevation one.  All marks on these 2 turrets are in centimeters.

All these intricate mechanisms would be nothing without quality glass to back it up. Indeed, this is the second halftime where many new and exciting brands fail to deliver the final touchdown. But you can always depend on the excellent optical performance of Schmidt & Bender.

The multicoated 56mm objective lens has great light permeability, above 90%. Usually, this piece of information wouldn’t be of note for a premium tactical scope. But with magnification dialed to 36x, you’ll learn to appreciate every photon that filters through the glass. The eye relief is about 90 millimeters, which gives you enough space when using strong-recoil calibers.

Let’s talk magnification. To a conservative eye, the 6-36x is exorbitant. North American shooters are encouraging the trend of rising magnification powers, claiming that 6-36x range is the new 5-25x. And why not? While there’s not much of a trade between 5x and 6x on the low-end, there is a huge difference between 25x and 36x. You might not need it but it’s good to have it.

It’s the limited reticle selection that turned many noses when the news of Schmidt & Bender 6-36×56 PM II first came out. After all, the German manufacturer is famed for offering a wide variety of reticle designs. Just take Schmidt & Bender’s top-seller 5-25×56 PM II for example, which has twelve! But reticles P5FL and GR²ID are certainly a good place to start. Both are configured in the first focal plane.

The new P5FL reticle takes design cues from the P4FL reticle (favored among snipers) but has skeletonized outer bars and now incorporates a floating illuminated center dot. This was made to please competition shooters who need absolute shot precision. At the same time, the reticle is very clean for an unobstructed view of the target even on the highest magnifications.

Illumination in most competition scopes is truly useless since practical precision matches take place during the day. But GR²ID reticle sports an entire illuminated tree with an intricate holdover grid in the lower half. Why is that so? Schmidt&Bender employed illumination in an innovative fashion. Rather than cluttering the reticle with additional lines, the black-red color contrast is used to give additional information.

While on the subject of illumination – there are 11 levels of brightness. Between each step, there’s an OFF position. As we already mentioned, the illumination turret moved from the mounting space to the side parallax.

The manufacturer even offers integration of a tilt sensor for automatic switch off when the scope is not in a prone shooting position. But such customization on request will cost you a pretty penny on top of the already sky-high price of PM II scopes.

The new S&B 6-36×56 PM II doesn’t do half measures. It’s designed to deliver in the harshest environments and in real-world situations under duress, where no second-guessing is allowed. Brilliant engineering and superb image quality come at a steep price point, which is rumored to be $4000-5000.