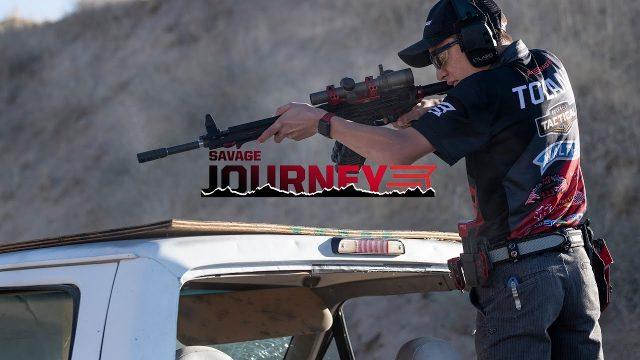 Logan Toland is a young shooter interested in sports shooting. He is the youngest member of Team Savage and Junior Ambassador. At some point in youth, almost everyone gets into a new hobby or sport. Many parents will indulge their child’s new-found interest knowing that it’s probably a brief phase and they’ll likely turn their attention back to old favorites. That’s what Logan’s parents thought about his newfound interest in shooting sports. But, Logan’s passion has continued into his late teen years.

A pistol and a few trips to the gun range was all it took for the Tolands to realize that this would not be a short-lived phase for him. “Logan was hooked. And it was just all downhill from there,” says Barb with a knowing smile. Fast-forward a few years, Logan’s interest has ignited a lifelong passion and set the Toland family on a Savage Journey as Logan Toland is Growing Up on 3 Gun.

“I thought we’d stay around here, and it’d be a local hobby. But no.” says Peter. At 16 years old, Logan competes in more than a dozen major 3 Gun matches every year across the country. “Mom comes with me to every single match,” says Logan. If you’ve ever met Barb, you’ll know that she is not the type to wait around for Logan to be done shooting at a match. Always on the move – Barb is never far behind Logan, picking up shells or helping him carry his firearms to the next stage. And when she’s not helping Logan, she helps the match directors with the registration table or whatever else needs to be done.

I don’t do much traveling. Someone’s got to stay home and work,” jokes Peter. Peter initially fueled his son’s interest in shooting by teaching him how to shoot. He also helps Logan load all his rifle and pistol ammo for his matches. Logan gives credit to his dad and says, “I wouldn’t be here in my career if it wasn’t for him.”

Joking aside, it’s clear that Peter and Barb are extremely proud of their son’s drive and commitment, his success in competitions, and his disciplined practice. “It’s been good seeing him learn patience and following through and accomplishing things,” says Peter.

GROWING UP ON 3-GUN

When Savage Arms Marketing Director Beth Shimanski met Logan at a Generation III Gun match in 2018, she knew Logan was a gem and wanted to work with him. His focus and attention to detail were apparent, and he shares the same values that we do at Savage. “The passion he showed for new disciplines was astounding. He dove in to learn as much as he could and reached out to others to create long-term relationships with other competitors,” says Shimanski.

Finding mentors in competition is critical for growth and improvement. Logan is fortunate that everyone can be your mentor in the world of competitive shooting. One such mentor is Savage ambassador and fellow 3 Gun competitor, Josh Froelich. “Finding someone you can lean on for input and who will tell it to you straight is so important. It’s our job to help new shooters and new sportsmen in the community and show them how to be professional, quality additions to the sport,” says Froelich.

Logan’s Journey in shooting is just getting started. Shooting will be a lifelong passion for this young man. He plans to stick around the shooting sports, create content, help develop better products, and keep competing.

“Everyone gets better, so you have to cope with that and get better yourself,” says Logan. This is the attitude of a true competitor. Competitive shooting is as much competing with yourself as it is with others. “Logan definitely motivates me and a ton of others to stay sharp. As he continues to improve, we have to stay on our toes to keep our game tight if we want remain competitive in the future!” says Froelich.

“Take the competitive side of Logan away, and you find a young man who simply wants to help bring more people into the shooting space,” says Shimanski. “The shooting sports are full of passionate people who just want to share their passion with others and Logan is one of those people.”